Archive for the tag “success”

Would you be happy if you’d won Wimbledon? 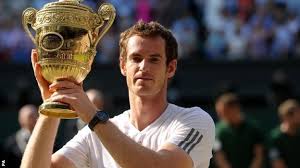 So Andy Murray has won Wimbledon (and the Olympic gold and the US Open). He has even managed to improve his public profile, not just by playing well but by showing us that he is a quirky, public spirited, generous and mildly humorous young man and not, it seems, the surly, monosyllabic adolescent we all thought he was last year. He is a national hero. So we can safely assume he is happy that he has achieved his ambition.

Or can we? I have a sneaky feeling that he is already starting to think that it might be quite nice to win two consecutive grand slams, or to prove that his Wimbledon success wasn’t a one off and that he would have won even if Nadal and Federer had still been in the draw …

What I suspect is that since last week the goal post (or in his case the net cord) will have changed and he will now be aiming for something even bigger and better. Because these sportspersons don’t rest on their laurels, they are never happy with what they have achieved, they always want more.

It is just the same with writers and wannabe writers. ‘I’d be so happy if only I could get my book published …’ quickly becomes ‘I’d be happy if only I had more sales/more fan letters/more prizes/more acclaim/a film deal …’

I read a blog post today by a lady who felt brought down because she hadn’t found a publisher for her dog training book even though she had a zillion (or thereabouts) ‘likes’ on her pet blog. Another from someone disappointed by being runner-up in a novel writing competition. A third by a published writer peeved that he wasn’t getting enough Amazon reviews.

In contemporary life we are programmed to strive, to aim high, to set targets, to court success. But it seems we aren’t programmed to enjoy that success when it comes. When my first novel was picked up and published by Orion I should have felt absolute delight. In fact I felt a vague sense of dissatisfaction; somehow the reality of the moment didn’t live up to my expectations, the cover wasn’t quite as nice as I had hoped, I found the book signing sessions a teeny bit boring and my agent was already hassling me for the next in the series.

So what I’m saying is we need to try to take time enjoy the moments of triumph, however minor they are in our own mind, or in the big scheme of things. Ambition is fine, but there’s no point in it if we don’t relish the smaller successes it brings on the way.

Success comes in many guises, it’s not just about prizes, fame and healthy royalties. We can’t all win Wimbledon (I’m delighted if I get a few serves into the box). We can’t all be J. K. Rowling. But we can train ourselves to feel happy when we achieve something, even if it is only finishing a chapter, getting a nice review or successfully house training a new puppy.