Archive for the tag “France”

The final moment has come 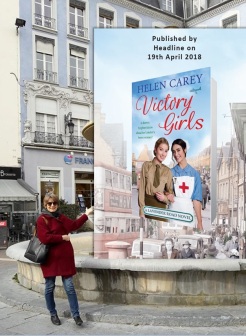 And so the final moment has come! VICTORY GIRLS, the sixth and final book in my Lavender Road series, is published today. In hardback in the UK and as eBooks in the UK and USA. The Audio versions will follow very soon, and the paperbacks later in the year.

I can hardly believe that after writing over a million words, I have finally brought the series to an end. And although everyone is asking for more, I really do think a million words is enough! The series starts in 1939 just as the Second World War began, and it finishes in 1945 on VE Day just as Victory in Europe is declared. I like the symmetry of it, six books over six years. And I very much hope all my readers will feel that I have brought the story to a satisfactory end. I will of course miss my long suffering characters, Jen, Joyce, Helen, Molly, Louise, Katy and Mr Lorenz (not to mention the ever gorgeous Ward Frazer, Henry Keller and André Cabillard!) but they will be there in print, and on our Kindles, for perpetuity, available for revisiting and rereading at any point.

So all I am going to say now is that I very much hope you enjoy VICTORY GIRLS, and hope that if you do you will post reviews and star ratings on Amazon and other social media or historical fiction groups. And, if you have time, for the earlier books in the series too! It really does help, and might even persuade me to write the next book!!!

VICTORY GIRLS is published by Headline in the UK and TSAP Books in the USA on 19th April 2018. (Click here to find it in your local Amazon store.)

It’s August 1944. Allied forces are finally making headway in Europe. But continuing rocket attacks on London are a chilling reminder that the war is not yet won. Victory may be just round the corner, but the fighting is far from over for the residents of Lavender Road.

Sweeping from London to France and on into Germany as Hitler’s army begins to retreat, Victory Girls is full of emotion, excitement and suspense, which will hold readers on the edge of their seats.

Praise for the Lavender Road novels:

‘A tale of ordinary people living extraordinary lives.’ Inside Soap

‘Told with real excitement and a passion for the foibles of character and behaviour.’ Andrew Rissik

‘I never got so involved in the lives of book characters as in this series of books.’ Amazon review

‘Helen Carey’s Lavender Road novels are written with a lightness of touch, an emotional integrity and an historical accuracy which has brought her respect from critics and readers alike.’  Louis de Bernières

‘An incredible tale of bravery, love and trust. A must read.’ whisperingstories.com

I am off to France next week on a research trip for my next novel. And in order not to commit any faux pas I decided today that I should brush up on my French. Apropos the timing you may feel this is a bit late in the day, but au contraire, I am confident that with a little sang froid and a soupçon of je ne sais quoi I should be able to carry myself off with some panache. If I can just remember the difference between au naturel and eau naturelle, coup de grâce and cri de coeur, I should be able avoid any contretemps (and indeed any double entendres) during my research tête-à-têtes.

As you probably already already know from previous posts I love language, and particularly the French language, but vis-à-vis actually speaking it there is no doubt that we English generally have a very laissez-faire attitude. Most people I know either operate either in the ‘Allo ‘Allo, ‘Oh la la, zut alors, sacré bleu!’ mode or the more prosaic, ‘Parlez vous Anglais?’ mode. And, despite a multitude of evening classes and all the crème de la crème teach-yourself-language apps and CDs, plus ça change. The only French phrases that most of my friends can manage with confidence are ‘hors d’oeuvres, petits fours, vin rouge, nouveau riche, grand prix and papier maché’. Quelle horreur! But then en masse the English are known to be generally poor at foreign languages. C’ést la vie.

But the avant garde among us find this shaming, it is, in fact, one of my bêtes noirs. I believe it is de rigueur nowadays (you could almost say comme il faut) to at least have a go. Surely one of the raisons d’être of traveling is engaging with the locals. That’s certainly what I need to do on this trip. So next week I am going to give myself carte blanche to show not only some savoir faire but also some joie de vivre. I will use an aide-mémoire, I will seek out bon vivants and avoid ménages à trois (I have no desire to be a femme fatale) I will search diligently for the mot juste and chat away fluently to people in their pieds-à-terre about l’esprit du corps, cordons sanitaires, noms du guerre and agents provocateurs of the Second World War.

And will my trip be a success? Well, as far as I’m concerned, that’s a fait accompli.