Archive for the tag “dogs” 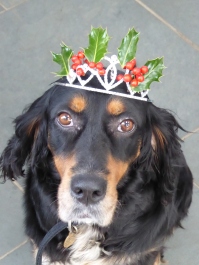 Happy Christmas from one happy dog!

First of all a big apology to my blog followers and friends for the dearth of posts this year. Since I finished writing Victory Girls, the last novel in my wartime Lavender Road series, and since our little dog Maisie died in September 2018, we have been mostly away, travelling the world!

We have had an amazing year of adventures, culminating in a road trip to the island of Kythira in Greece (where Marc and I met 19 years ago!) to bring back a very sad dog we had found there in the summer. She was chained up in the middle of nowhere, all on her own, very dirty and uncared-for, and seemed so pathetically pleased to see us that we felt we had to do something about her.

It’s a long story, and took a lot of organizing, but our lovely Greek friends on the island helped enormously by arranging for us to have her, keeping her in an outbuilding, and taking her to the vet for inoculations so she could have a passport ready for her trip back to the UK once the weather was cooler. They named her Hera, and we have decided to stick with that. So in September, as soon as we had got back from a 3000 mile trip round North west USA and Canada (wonderful!), Marc and I loaded the car with every piece of dog paraphernalia we could think of (Hera wasn’t house trained and we had no idea how she would cope with the journey) and set off to fetch her.

Hera as we first saw her in July

The trip lasted a month and turned out to be just over 5000 miles long. By now we had discovered that Hera had originally been owned by a bird hunter who had beaten her for being frightened of the guns. By the time we found her she had been on that chain for 10 years.

To our amazement, right from the start she loved the car, she behaved impeccably in the hotels we stayed in on the way home, and enjoyed the various walks we managed in a range of locations (mainly trying to avoid the attentions of local street dogs!) She is now settling well to life in Wales and we are delighted with her!

Wishing you all a very peaceful Christmas and a healthy and happy New Year!

Courage as a ‘controlling idea’

Last week we were away staying in a friend’s cottage in mid Wales. On one of our walks we had to cross a fast flowing river by way of some strategically placed stepping stones. Marc and I and one of the dogs went over without thinking about it, but our other dog , Phoebe (normally very placid), balked on the river bank,  clearly frightened by the thought of slipping on the wet stones and falling into the river. We were reluctant to carry her (also frightened by the thought of slipping and falling into the river!) so we tried some bracing encouragement while she trembled on the bank with her little claws spread in resistance.  Eventually we decided to walk on a bit to see if she would come. Sure enough, surreptitiously glancing over our shoulders, we saw her summon the courage to make the first crucial jump. After that she was fine, she hopped across the rest of the stones easily and rejoined us, clearly somewhat embarrassed by our fulsome congratulations.

Here’s a question. Which dog displayed the most courage?

I have always been interested in the concept of courage and its various manifestations. There has been a lot in the news this week about the people of Malta being awarded the George Cross in April 1942 for their ‘heroism and devotion’ in resisting four months of intense Nazi air-raids. The stories of incredible courage and personal sacrifice reminded me of the research I did (and am indeed still doing) for my series of novels set in wartime London.

Quite early on I realised that courage was going to form the basic theme (or ‘controlling idea’ as they call it in the film world) of my novels. Having a ‘controlling idea’ really helps in the writing process, keeping an author on track, giving the novels a point of focus. And the concept of courage was a great theme to explore.

I was fascinated by the accounts I came across of people going out on a limb, putting themselves at risk, physically or emotionally, for a variety of reasons, patriotism, duty, love, or to save or protect someone else, as when a terrified young woman crawled through the collapsed cellar of a bombed house to rescue a child trapped under unstable rubble next door.  Certainly of all the examples of bravery and heroism I came across, the ones I found most moving are the ones where ordinary people (or dogs) first had to overcome a very real fear in order to take the necessary action.

Courage takes all forms and guises and can be found in so many situations. It takes one form of courage to charge a machine gun post or parachute into Nazi occupied France, quite another to go to the doctor when you find a lump. Even writing a poem or a novel takes courage – it’s just one more way of laying yourself on the line.